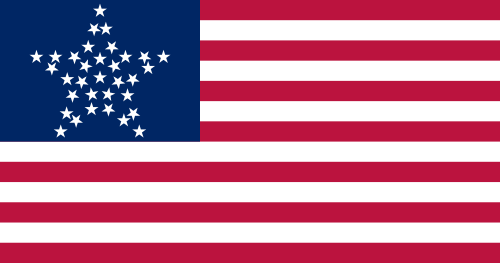 The United States is a country of countries. Don’t believe me? Check the dictionary:

Not convinced? The colonies that became the United States first created the Continental Congress via a document titled the Articles of Association, stating

We, his majesty’s most loyal subjects, the delegates of the several colonies . . . deputed to represent them in a continental Congress, held in the city of Philadelphia, on the 5th day of September, 1774, avowing our allegiance to his majesty, our affection and regard for our fellow-subjects in Great-Britain and elsewhere . . . .

The Articles of Association was a “non-importation, non-consumption, and non-exportation agreement” meant to call Great Britain’s attention to the grievances of the colonies regarding the administration of the colonies.

Let’s skip to 1776, and to the end of the Declaration of Independence:

We, therefore, the Representatives of the united States of America, in General Congress, Assembled, appealing to the Supreme Judge of the world for the rectitude of our intentions, do, in the Name, and by Authority of the good People of these Colonies, solemnly publish and declare, That these United Colonies are, and of Right ought to be Free and Independent States; that they are Absolved from all Allegiance to the British Crown, and that all political connection between them and the State of Great Britain, is and ought to be totally dissolved; and that as Free and Independent States, they have full Power to levy War, conclude Peace, contract Alliances, establish Commerce, and to do all other Acts and Things which Independent States may of right do. (emphasis added)

There are a few things to notice here. (1) That escalated quickly; (2) The reference to Great Britain as a state; (3) The use of the plural when the colonies, now states, refer to themselves; and (4) The declaration that they now have the powers to do all the things other states, such as Great Britain, can do.

Not enough, you say? In 1778, two years after the states signed the Declaration of Independence, and notably, while the war was still going on, they created the federal government in a document titled The Articles of Confederation and Perpetual Union.

Article 1 formally names their union “The United States of America.” However, what we’re really interested in here is Article 2:

Each state retains its sovereignty, freedom, and independence, and every Power, Jurisdiction, and right, which is not by this confederation expressly delegated to the United States, in Congress assembled.

Yes, you’re reading it correctly – the states created Congress, and gave it some of their powers. Among these powers were the power to declare war and coin money. To further their “league of friendship,” they also created open borders, extradition, and gave full faith and credit to the decisions of the courts in each state.

“But, what about the Constitution,” you ask. The Articles of Confederation was ratified in 1781. It created a weak central government – laws could only be passed with a unanimous vote –  and Congress’ only major accomplishment was the Northwest Ordinance. Furthermore, Congress could not levy taxes. By 1786, the treasury was almost depleted, the national debt was large, and the country was on the brink of economic disaster.

Contrary to popular belief, the Congress issued a formal call for a convention to amend the Articles, resulting in the Constitution of the United States, which begins with the words,

We the People of the United States, in Order to form a more perfect Union . . . . (emphasis added)

which only makes sense if something preceded the Constitution.

What changed under the Constitution? Congress gained the powers to tax, to regulate commerce among the states, and to protect ideas through copyrights and patents. The President would now be elected by the Electoral College, instead of by Congress. The Supreme Court became its own body, instead of Congress deciding disputes between states and a few other matters that are subjects for another time.

What didn’t change? Citizens were still entitled to the privileges and immunities of the citizens of the other states. States still had to recognize each other’s laws and judicial rulings. But, importantly, the Constitution doesn’t repeal the Articles of Confederation. Abraham Lincoln used this argument during his first inaugural address to justify his position that the Southern States could not secede, saying

But if destruction of the Union by one or by a part only of the States be lawfully possible, the Union is ‘less’ perfect than before the Constitution, having lost the vital element of perpetuity.

It follows from these views that no State upon its own mere motion can lawfully get out of the Union; that ‘resolves’ and ‘ordinances’ to that effect are legally void, and that acts of violence within any State or States against the authority of the United States are insurrectionary or revolutionary, according to circumstances.

Though much of the Articles of Confederation has been abrogated, the perpetual union of sovereign, independent states that gave some of their power to a central government remains. However, this doesn’t explain the vast influence of the federal government today, so let’s take another look back, starting with the Constitution.

One of the main arguments in favor of ratifying the Constitution was that if the union dissolved, and three, four, or 13 countries came out of that dissolution, these new countries would not exist very long. After all, there were much larger enemies on all sides, and a big union of three or four states might become a threat to the rest.

One of the main arguments against was that the states just left a powerful central government, and they didn’t want a repeat of what happened with Great Britain. To that end, the Constitution included several provisions to limit the federal government’s power.

For example, slaveholding states benefitted from 11 different clauses, even though none of them use the word “slave” (though this is a topic for another time). Delegates also insisted on the Bill of Rights. Initially, the prohibitions against government power only referred to the federal government. The Tenth Amendment specifically reserves rights not given to Congress to the states – in words mirroring Article 2 of the Articles of Confederation.

The Commerce Clause, on the other hand, gives the federal government powers in areas it might not otherwise have. For example, the Civil Rights Act of 1964 depended on the Commerce Clause to end discrimination by disallowing stores that sold goods that travelled between states or hotels servicing interstate travelers to discriminate against racial minorities. The federal government can also give money to the states on the condition that the states implement rules (such as highway speed limits) in exchange for the funds.

With that in mind, I think it’s fair to say that the power relationships between the states and the federal government are a bit complicated. Though the base of the relationship is a limited transfer of power to the central government, the states have given the federal government more power through making deals with it while limiting some of their own power through Constitutional Amendment. This makes our country of countries more like a web than a ladder.